Christopher Hall and the Comic Quartet 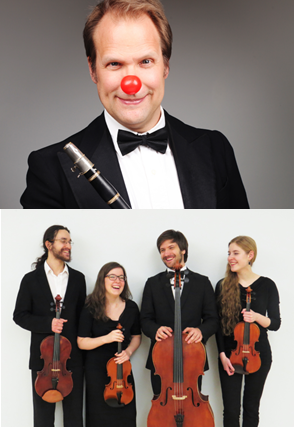 Christopher Hall and the Comic Quartet

Christopher Hall­ is well known for delighting audiences with his special combination of beautiful music and hilarity. Let him and this irresistible group of musicians fill your ears and heart with joie de vivre! Between each work on the programme, Hall turns into a stand-up comic and pokes good fun at the musicians, the music, and especially at all the familiar but sometimes stuffy rituals that can come with classical music performances. In so doing, he reminds us that this music is made for everyone, no PhD required. On the programme: works by Mozart, Brahms, and Weber.

Christopher Hall is the former principal clarinet of the Orchestre Métropolitain in Montréal (under Yannick Nézet-Seguin) who found work in the orchestra far too serious! So now, instead of joking around while sitting in the orchestra, he performs as a stand-up comedian, and does various television and radio shows in both English and French.

In the past seven years, he has performed his acclaimed concert ‘Comic Orchestra’ in Canada alongside some of the best symphony orchestras in the country. He also performed it with a chamber orchestra in July 2014 at the Montréal Just for Laughs festival in front of a crowd of 3000, to rave reviews.

He has appeared in such prestigious comedy festivals as Just for Laughs, the Winnipeg Comedy Festival, and the Grand Rire in Québec City.

In 2010, he had the honour of hosting Whoopi Goldberg’s show in Québec City as well as performing opening acts for several prestigious North American comedians.

Mr. Hall has toured with his comic quartet in Quebec, Alberta and BC.

Christopher Hall is fluent in English, French, German, and Italian. But whatever you do, DO NOT take this man seriously!

Junior string quartet in residence at the Université de Montréal, Quatuor Andara distinguishes itself by its vitality and its quality of execution. It was in September 2014, around Ravel’s Quartet in F major, that its members met for the first time at the Conservatoire de musique de Montréal, under the tutelage of Denis Brott. Since then, their bond and musical passion has transported them to multiple stages across Quebec. They have also participated in numerous high level international festivals and seminars which allowed them to work with musicians such as Günter Pichler, Mathieu Herzog and the Talich String Quartet at the 2018 edition of MISQA, the St. Lawrence String Quartet in Stanford (CA) during the summers of 2017 and 2018, Johannes Meissl and the Shanghai Quartet at the Pablo Casals Festival in France in 2017, as well as Barry Shiffman and Mark Steinberg at the Banff Chamber Music Residency in 2016.

First prize winners at the Pierre-de-Saurel Classical Music Competition in 2015, and at the Sherbrooke Competitions of 2017 and 2019, they also participated in the first edition of the Strijkkwartet Biennale Amsterdam in 2018, performing for members of the Emerson Quartet, Cuarteto Quiroga, Signum Quartet, and the Quatuor Danel, amongst others.

Quatuor Andara was the ensemble-in-residence for the Concert in the 21st century program at the Banff Centre last February, as well as for the Ottawa Chamberfest Career Development Residency in August 2019.